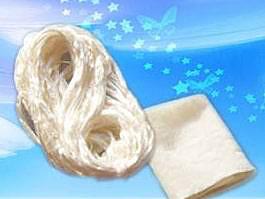 Recently, the only textile new material combining sea and land in the "blue economic circle" jointly developed by Zibo Niqier Textile Technology Development Co., Ltd. and Qingdao Daxun--self-inflammable clothing of seaweed fiber is about to come to the market. The revolutionary high-end new technology products have a vast space for development and utilization.

Many people may feel strange about seaweed fiber. Can seaweed be worn on the body? The answer is yes. The seaweed fiber that can be worn on the body is actually a special material that is spun from a material extracted from natural seaweed. There are two sources of traditional fiber: a terrestrial biomass fiber, including cotton, hemp, silk, wool, etc.; the other is synthetic fiber extracted from petroleum products. In the current situation of decreasing land and oil resources, it is an effective way to enter the ocean and develop the third source of fiber. Germany, the United Kingdom, and other countries have long since extracted seaweed fibers from seaweed, but most of them are used only for medical dressings. The seaweed fiber developed jointly by Nyquill and Qingdao Daxun will use unlimited marine resources in the textile industry and will drive the upgrading of the traditional textile industry.

As a new life with vitality in the textile industry, seaweed fiber has also undergone a long research and development process. The general manager of Nai Qier, Jiang Ming, briefed the reporter. Since 2003, the research and development of seaweed fiber was listed as the Qingdao science and technology talents program; in 2006 it was listed as a national natural science project; in 2008, it was a major independent innovation project of Shandong province. This shows that the government attaches great importance to excavating marine resources. In April 2009, the "863" project team of experts in marine technology field surveyed the algae fiber project; at the end of the year, the "863 seaweed resources for fiber production and key technology development for deep processing" 863 key projects passed the project implementation program demonstration; in 2010, Qingdao University* * Hehe Bonaiqier Company conducts research and development afterwards. In August 2011, Zibo Nazier signed a cooperation agreement with Qingdao University on the application and development of seaweed fiber, and co-founded Qingdao University-Natchier Textile New Material Technology R&D Center, becoming a closely related national 863 project of Qingdao University. Sexual partners. After that, Nythe joined shares in Kangtong Marine Fiber Co., Ltd. and became the original shareholder of Algae Fiber Industrialization Corporation. "Industry, academia, research, commerce, and government," the integration of superior resources in the high-tech industry company led by Qingdao University, lays a solid foundation for the establishment of the application of research, development, industrialization and branding of seaweed fiber. Zibo Nazier is responsible for the development and industrialization of seaweed fiber to fabrics, accelerating the high-tech R&D achievements of Qingdao University. Hard work pays off. The seaweed fiber blended flame retardant fabric was tested successfully at the Qingdao University-Natchel Textile New Material Technology R&D Center. The "seaweed fiber blended flame retardant apparel fabric and production method" test was successful and applied for a patent. After scientific and technological research and development, it can be used in textile and clothing, decorative materials, special textiles (such as flame-retardant clothing, etc.), functional materials (such as biomedical), and has a vast space of use.

Broad development "I have valued my life"

â€œI have now found the fulcrum of my ideal life, which is to create value and repay society. If we let ordinary people wear affordable algae fiber clothing, save the countryâ€™s expensive arable land, and truly serve the community, I think my life is worth it. "Looking at the development prospects of seaweed fiber, Jiang Ming's excitement filled the rhetoric. "Seaweed fiber is different from any known fiber material, and it is a revolutionary high-end new technology product. The development prospect is very broad." Jiang Ming was born in Qingdao and graduated from Shandong Textile Engineering College (the predecessor of Qingdao University of Textile and Clothing Institute). "With no alma mater, there would be no me today. I very much hope to be able to cooperate with my alma mater and finally get my wish." Jiang Ming's words are full of affection for his alma mater.

At present, the fabrics on the market can be described as dazzling. Consumers demand high comfort, safety, and environmental protection from their fabrics. What kind of chips does the seaweed fiber made from R&D have to gain market share?

Jiang Ming introduced that seaweed fiber is soft, smooth, moisture-absorbent, skin-friendly, and biodegradable. In particular, its limiting oxygen index of 34 or more, greatly exceeds international standards, and is inherently self-inflammable. Consumers' seaweed fibers do not produce harmful gases and do not generate droplets when they are in contact with fire. The most critical issue is that they will not cause secondary damage to the skin. Nayir Corporation and Qingdao University are committed to the application research and development of seaweed fibers. The traditional textile industry has a new material upstart and clothing upstart.

China has vast land, abundant resources, a coastline of 18,000 kilometers, 370,000 square kilometers of territorial sea and more than 3 million square kilometers of marine exclusive economic zone. It is the world's largest aquaculture aquaculture country, and the production of seaweed ranks first in the world. At present, the total output of light-dried seaweeds in China amounts to 1.2 million tons. There are 800,000 tons of dried kelp produced annually in kelp cultivation and about 30,000 tons of sodium alginate production. Extracting seaweed from the sea and extracting seaweed fiber from seaweed, the deep seabed brings new hope for the development of human clothing and textiles, and its market prospects are as broad as it is.

For the future, Jiang Ming is full of confidence: â€œNext year, algae fiber shirts, underwear and other clothing will be available on the market, and we will also provide fire-retardant for the troops.â€ Nythier has been focusing on the research and development and production of new materials. The company will devote to the industrialization of technology application of natural textile functional new textile materials and provide high-quality new materials for the home textile apparel industry."